What can we learn about the Tudors from their art?
View resources Teachers notes Share View related stories
Add to board
Previous section
Marcus Gheeraerts - Background Information 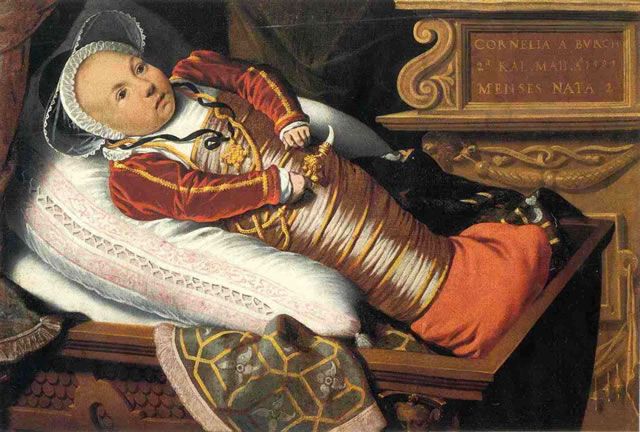 This painting, 'Portrait of Cornelia Burch Aged Two Months',  painted in 1581, shows an infant dressed in swaddling bands, as was the custom at the time.  It presents a rather different identification problem from the previous portraits in that this time we know who the sitter is (Cornelia Burch) but not the artist who painted her. The painting is from the Netherlands but we cannot prove the identity of the artist.  We can see an inscription with the child's name in the top right corner of the painting.

This painting can also tell us about the lives of the rich in the sixteenth century.  To commission a portrait was an expensive business and most portraits were of adults or families with older children.  Mortality rates at this time were high with many babies not surviving early childhood.  A combination of these two factors means paintings of babies are extremely rare.

Although some paintings were made in memoriam of deceased children, it is thought that this painting was not as there is no reference to death.  The picture may have been commissioned to celebrate her birth or perhaps her Christening as her name is inscribed in the composition.

Aside from the fact that this painting exists, there are a number of other clues that tell us about the Burch family's wealth.

Childhood in Tudor times was very different to today and perhaps the most striking thing about this image is the way the child is dressed.  It is thought that simple swaddling bands were first used in 4,000 BCE.  By the sixteenth century, they had become more complex and involved a number of layers.

Swaddling involved wrapping the baby very tightly with bands of linen, with the legs and arms straight.

It was thought that the tight bands would help the baby's bones to develop properly and prevent diseases.

Full swaddling restricts the movement of the child from head to toe and was usually practiced for the first month of life. In the painting of Cornelia Burch, the child is only half swaddled, leaving her arms free, reflecting her age and also perhaps that opinions on swaddling were beginning to change.  She has a linen shift underneath luxurious velvet sleeves with gold braid decoration.  The swaddling bands themselves are made from silk rather than plain linen and are secured with more gold braid.  She wears a bonnet similar to those worn by adults giving her a strange, wise appearance unfamiliar to us today.

In her hand, Cornelia is holding an object known in the Netherlands as a 'rinkelbel', used for soothing and entertaining her.

The polished shark's tooth acts as a teether whilst the small bells will amuse and entertain.

It has been suggested by some historians that children were trained to use it when they needed to attract attention.  Made from gold, it demonstrates how wealthy her parents must have been to buy such an expensive item for their child.

The cradle and bedding on which the child is shown is of very high quality.  The cradle itself is beautifully carved and the fabrics on which she is lain are sumptuous and decorative.