Processing the ore was a two stage process – Dressing and Smelting.

This was the process of sorting out the raw materials (bouse) extracted from the mine. The miners brought the bouse to the surface. It was stored nearby in stone built storage hoppers caller bouse teams from where it was ultimately taken to a 'dressing floor', the area where the sorting took place. Often one dressing floor was shared by more than one level or mine but it was important not to expend too much energy moving unprocessed bouse over great distances.

The bouse was sorted by hand by boys, often as young as 10 years old, women and older men.

This involved sorting out the lumps of pure galena (ore) which was separated, and deads rock containing no ore, which was discarded on a nearby spoil heap. The remainder of the material contained some ore but needed to be cleaned up before smelting by knocking off lumps of with a spalling hammer.

Once a pile of pure galena was produced the lumps needed to be reduced in size to about the size of peas. Initially this was done by hand using a heavy flat hammer called a Bucker, but was later mechanised by the use of crushing wheels (essentially a giant mangle), powered by water. 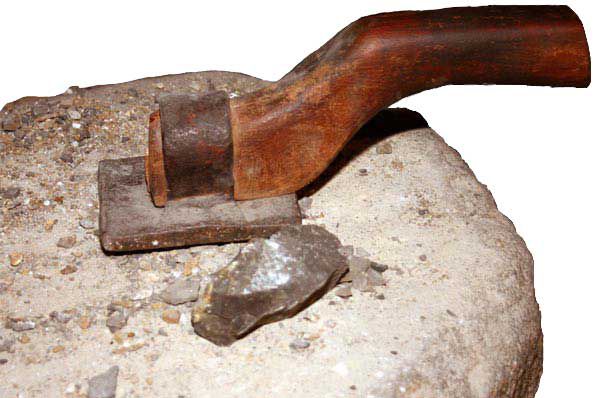 Finally the small lumps of ore were sieved in water. This allowed the heavy particles to settle to the bottom and lighter waste particles to remain at the top to be scraped away and discarded. Later this was done more efficiently using Hotching Tubs – a large tub effectively sieving larger quantities of ore by jiggling the sieve up and down using a lever. Eventually Hotching Tubs were mechanised by the use of water wheels. The very fine grains or ore were not lost but gently washed in slow moving water to collect the 'slime' or fine ore while the lighter waste was washed away. Stepped designed ‘running buddles’ were used to make this a more efficient process.

Once the pure ore was reduced to a suitable size it was transported to the nearest Smelt Mill which served a number of mines in the area.