Rage Against the Machine

Benjamin Gott was good at dealing with unexpected and sudden change. He saw fires at his factories not as disasters, but as opportunities for improvement, rebuilding both Bean Ing and Armley Mills as ‘fire-proof’ factories of brick and iron.

When Armley Mills caught fire, the workers strove to save it. Their livelihoods were dependent on the running of the mill, yet their jobs were by no means easy. Working conditions in the mills were very different to those in modern factories. With no health and safety rules, the mills were noisy, crowded and dangerous; illness and injury were rife. Workers' homes were little better, with most living in cramped conditions with basic sewage, the air thick with the smoke from factory chimneys.
When employers began introducing new technology, replacing workers with machines, people did not take kindly to these changes. Many of the workers losing their jobs were highly-skilled and earned good wages. Now they were being forced to accept lower wages and a less skilled job, because a machine could do their job more efficiently and cheaply than they could.
When Gott tried to get some of his workers to use a new machine for finishing the cloth he received threatening letters, his windows were smashed and he had to hire a bodyguard. Sometimes there were strikes and protests too. 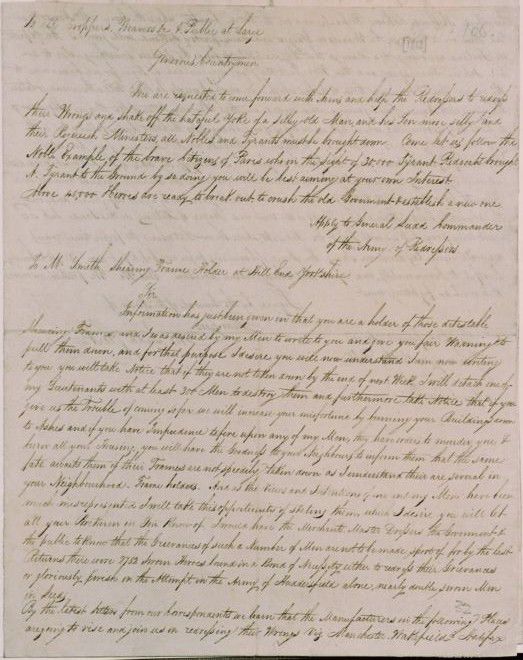 Threatening Letter Received by Gott
The letter pictured above was sent to Benjamin Gott's workers, after he introduced new machinery. It appealed to them to protest against the new technology:
To all croppers weavers and public at large
Dear countrymen, you are requested to come forward and help to redress their wrongs and shake off the hateful yoke of a silly old man and his son more silly and their roguish ministers...