At Bean Ing Mill, the water supply powering the spinning wheels was unpredictable and sometimes stopped work at the mill completely. To address this problem, Benjamin Gott began negotiations with the engineering firm of Boulton & Watt about a coal-fired steam engine.

In 1793 Gott gained the first steam engine in Yorkshire. He also bought the patent for the engine, because it was easier to have a new engine made nearby, than to transport it from London over rough roads or too narrow canal tunnels. 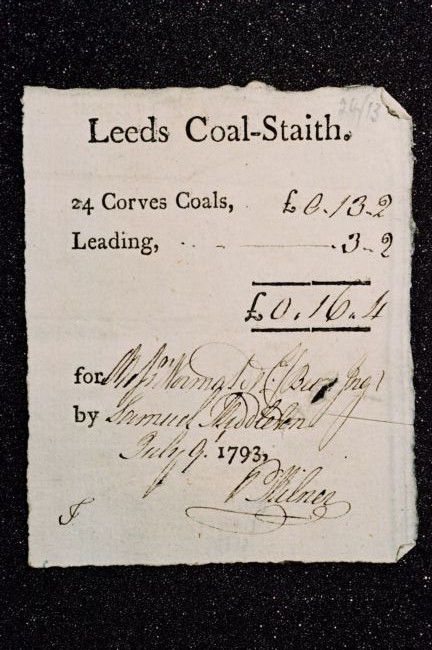 A Reciept for Coal at Bean Ing
The new engine required a considerable amount of coal. The images of documents above show Gott's business receipts from 8-9 July 1793 for 144 corves of coal (corves were wicker work baskets used to carry coal). This gives us an idea of the amount of fuel required to keep the steam engine working.

Gott's new engine made him the talk of the town. Just as enterprising businessman today employ PR, Gott knew the value of good publicity, and his steam engine is a clear example of this. Movers and shakers from politics, science and industry made a point of visiting Bean Ing to see Gott’s amazing new machinery. European royalty even made a stop at the mill on their tours of England. 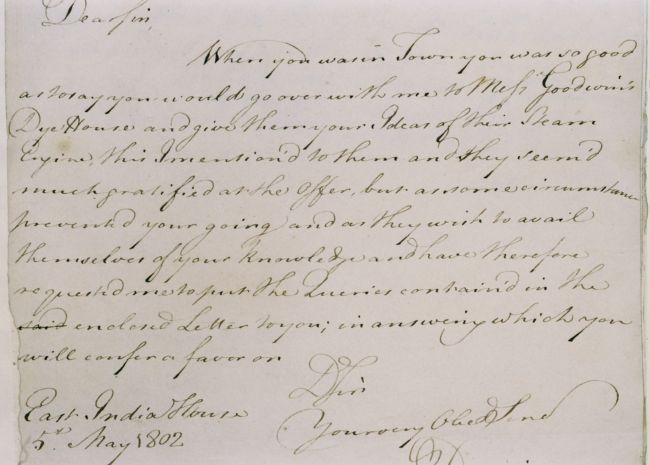 Letter from Gott Expressing his Interest in a Steam Engine
Gott was fascinated by science and technology and he developed a close partnership with the engineers Boulton and Watt. However, Gott had a fierce rival: the Leeds cotton manufacturer Marshall and the engineer Matthew Murray. When Watt accused Murray of plagiarising his design for a steam engine, Benjamin Gott defended his ally, by calling Watt was ‘the right kind of person’ while he dismissed Murray as a mere working man. Envy and competition were an inevitable part of industrial enterprise for Gott and his contemporaries.
Benjamin Gott was a canny businessman and he understood that for an entrepreneur there are different ways of investing. Gott was prepared to spend to gain political influence and he achieved this by investing in innovative technologies which established him as a leader in the civic and industrial life of Leeds.
Next section