A Day in the Life of a Young Sheffield Steel Worker

Listen to an account from an apprentice at Sheffield Forgemasters steel company in 2007.  There are more audio files on the resources page of this learning story.

Hear the audio from a discussion with a group of 'Little Mesters' and Sheffield steel workers who were based at Tinsley Wire steel company in the 1950s. 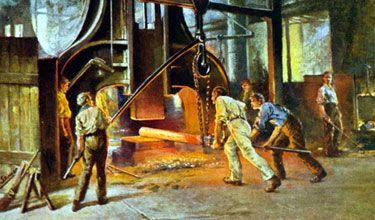 An Illustration of Sheffield Steelworkers

You can listen to the audio accounts of Mr J E White after inspecting cutlery factories in Sheffield in 1865 and it is accompanied by a audio transcription. The report highlights the poor conditions and hard work life of the young workers. 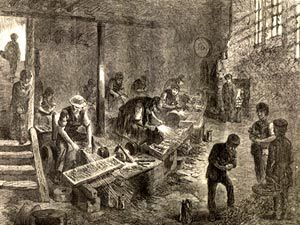 Illustration of a Victorian Grinders Workshop

During Victorian times Sheffield became a world centre for steel production and a large percentage of the Sheffield workforce was employed in the steel and cutlery industries.
Next section

Age: How Old Was I When I Started Work