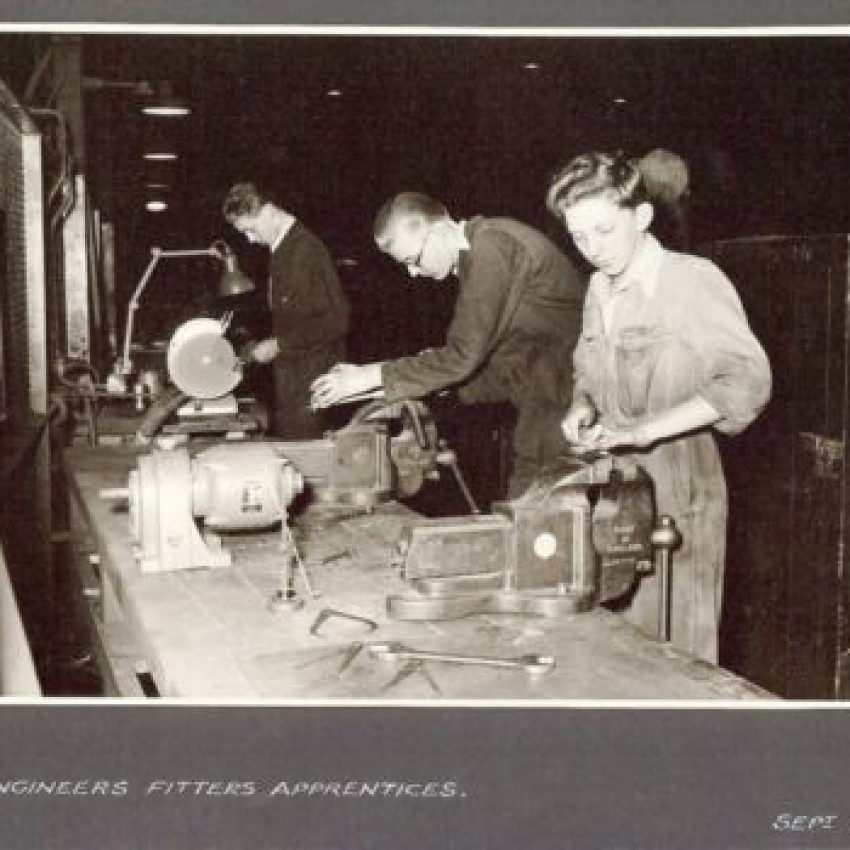 I left school at fifteen and I started here on this site, January the first 1956. This site then, held, eight thousand people, and when the day people came out who used to work half past seven to four it was like a football match turning out. This road here from, just here there used to be a pub at this corner, right down to the corner and right round the corner was a row of trams and a row of buses, and as I said, people used to charge out and go to respective buses.


Once you got in you came into normal clothing and then changed into working clothing. Which as Dave said was a sweat towel; you know a working shirt and clogs. Which you had to buy yourself. All the older guys used to have big macs on didn’t they and flat caps. It was like looking at old photographs of the match isn’t it.
There’s a bridle chain what you used to push with your hands and that, and everybody what wore a flat hat they never had gloves they used to just take their hat off and used that to push chain like, you know. I mean bearing in mind there was no free issue clothing then for work and you had to buy your own boots and all your working clothes. You'd beg steal and borrow from everybody you knew. If you've got any old clothes let me have them and I’ll use them for work.

When I first started. You were, you were taught by the peers around you, don’t go down there, one of first things I learnt, don’t pick a piece of, pick a metal up unless you spit on it. That’s right…Spit on it. And if it goes ‘ssss’ you don’t pick it up do you, ‘cause quite a few of my mates, you know, burnt their hands so, you know that were one of first things I can remember. When you walk in shop, stop and look up and make sure there isn’t a crane coming across or some, whatever, you know, things like that. Don’t walk round there ‘cause if somebody swings round with shovel, clunk, you’re gonna cop for one. So you were guided but by the, by the work people. The people around you.

Little Eric who worked down there with me told me, cause he worked in one of these little workshops as a little mester sort of thing but he was down in a cellar grinding and he used to tell me as a lad that he used to go home and his dad used to get him under the lamp right, and pick these molluscs of his eye after the days work sort of thing. I tell you what Ron you often see a mirror in a grinding hull. It's not for cosmetic reasons it’s to have a look to see what's in your eyes. I mean some of them were good at getting them off but I’d preferred that then going to the hospital.

We had five, five canteens with cooks, waitresses, we had three gaffers’ dining rooms
That’s, first stop when you’ve, first job when you started a job then you used to go to army stores and get yourself kitted out, that’s where you used to get your ex-ammunition bag from and your mashing can and they used to the, them food things, we used to even have, have them in us mashing thing as well, them steel, ex-army, yeah.

And then it was something like £11 a week, and then all I used to spend my money on were new suits because in them days you’d got a tailor on, a tailor shop on every corner and we all used to like suits, didn’t we, [agreement] whether it were Italian style, or teddy boy style, or…

When I first went into the wheel and saw this man turn a lump of steel into end product in no time with his hands. I were hooked, I were I couldn’t believe it! To see something being turned into something that you would see in the shops, brand spanking new.