Listen to dialogues of imagined wartime scenes from Temple Newsam Hospital evoking the atmosphere of life on the wards.

From 1914 to 1917, the South Wing of Temple Newsam House was used as a convalescent hospital. Edward and Dorothy Wood, the owners of the house still lived there during this time. Edward Wood joined the Yorkshire Hussars in 1914 and served in France from 1915. His wife Dorothy oversaw the running of the hospital as the Commandant.
Like many wealthy families, the Woods wanted their estate to be used for the war effort. Lady Wood joined the Mayor's War Committee in Leeds and offered Temple Newsam House as a hospital. The first patients to arrive were Belgian officers on 29 October 1914, after the German invasion of Belgium. 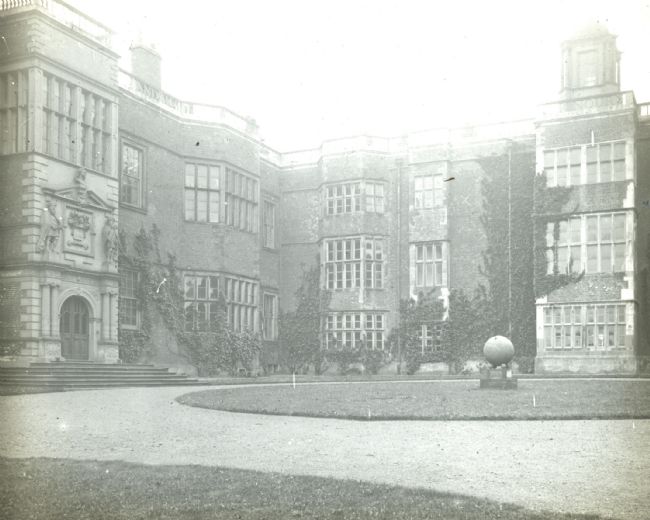 Lantern Slide Showing Temple Newsam House
The hospital was staffed by a Matron, who was a professional nurse, as well as nurses from the Voluntary Aid Detachment (VAD). As Commandant, Lady Wood oversaw the daily running of the House but she left the nursing to the VAD recruits, who were ‘anxious to practice their training’. The number of patients and staff fluctuated. The maximum number of patients was 30. In early August 1915 there were 20 patients but a fortnight later only 9, with 8 VAD nurses to look after them.
Through 1915-17, the diversity of patients increased. Soon Irish, English and Welsh patients rubbed shoulders in the hospital. Lady Wood kept them entertained with sports, a cinematograph and evening concerts. Trips were arranged, including to the museum of the Leeds Philosophical and Literary Society. Sport was very important for well-being – the men played billiards, tennis and football. Temple Newsam men won the inter-war hospital billiards trophy.
Temple Newsam Hospital closed on 23 November 1917. Lady Wood later wrote in her memoirs: ‘It was an odd life, saddened almost daily by the terrible casualty lists and the loss of so many friends.’
Next section