Many of the women whose husbands, fiancés or boyfriends were killed in the First World War felt that they too had served their country by sacrificing their men to war, and that their loss deserved recognition.
Women’s lives had been dramatically reshaped by loss. Kitty Eckersley’s husband Percy died at the Battle of the Somme in 1916, while she was pregnant with their son. Many years later, when her memories were recorded by the Imperial War Museum, Kitty talked about the impact Percy’s death had had upon her at the time:
"I felt I didn't want to live. I had no wish to live at all because the world had come to an end for me. I had lost all that I loved."

However, the impact on these women was not just emotional. At the time men were paid much higher wages than women (26 shillings per week on average, compared to 11 shillings for working women), and the loss of a husband often also meant losing the main breadwinner in a family.

Women who lost their husbands in the First World War were granted the first State-funded, non-contributory pension (meaning that they did not have to pay a contribution towards it). They also received a dependents’ allowance for any children under 16. Charities such as The Soldiers’ and Sailors’ Families Association and The British Legion provided some families with additional support. 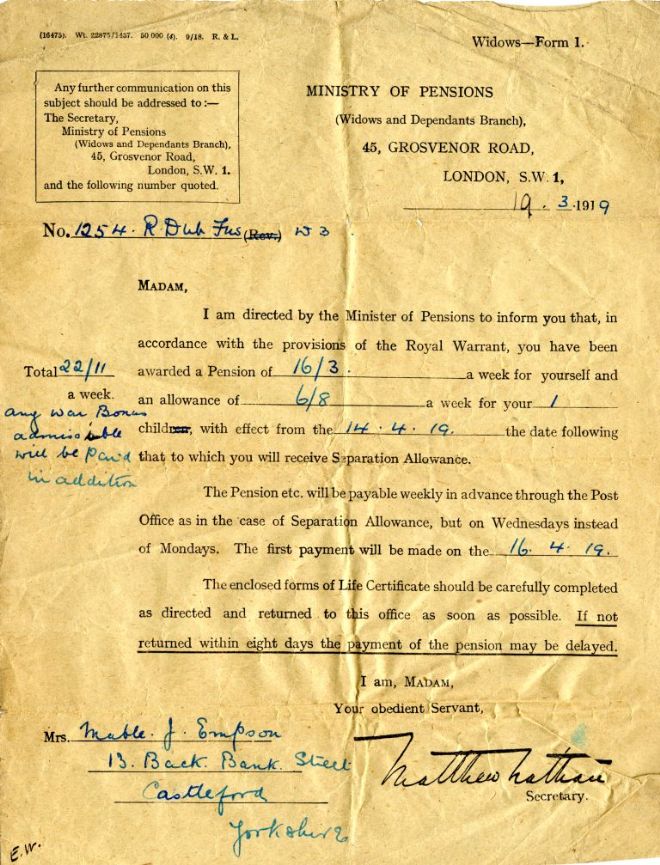 Letter to War Widow Mabel Empson from the Ministry of Pensions
Not all women were granted the pension.  A woman who married an ex-soldier after he had been discharged from the army would not get a pension if he later died from war wounds. Some women had their pensions withdrawn by the Local Pensions Office if they were judged to be behaving in the wrong way, for instance if they were accused of drunkenness, neglecting their children, living out of wedlock with another man or had an illegitimate child. Thousands of women wrote to the authorities to appeal for a pension.
There was fear that if the pension was too generous, then it would mean that women would be discouraged from supporting themselves. ‘Eighteen shillings a week and no husband were heaven to women who, once industrious and poor were now wealthy and idle’ one man wrote to the Daily Express, complaining of the pension.

A Generation of 'Surplus Women'