Whilst the British public were used to hearing reports of the army taking part in distant overseas wars, the advent of bombing raids on British soil brought about a new experience of war. Women and children being attacked in their own homes was seen as far more horrifying than the normal pattern of war, in which men would go away to fight against the enemy. The bombings also provided fuel for Government propaganda, as a persuasive argument for men to join up. 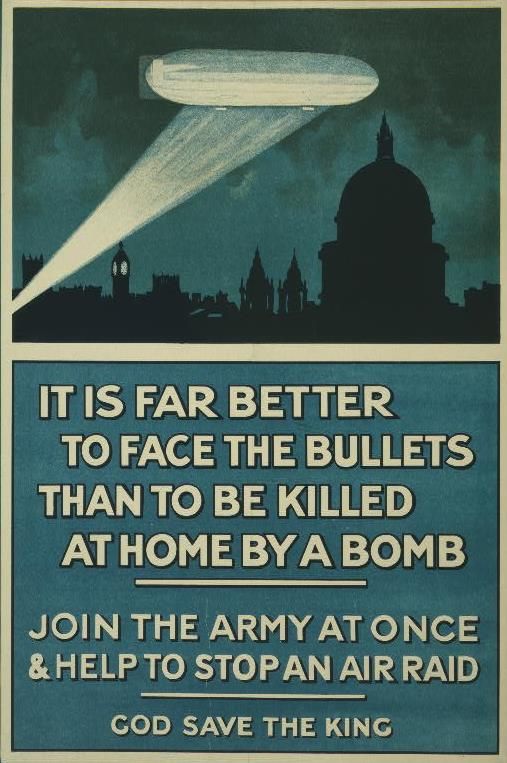 1915 Army Recruitment Poster
In 1914, the Germans launched bombing raids on Britain from the sea and sky. Suddenly civilians on the Home Front, as well as soldiers on the Front Line, were at risk. The German military believed that they could use Zeppelin airships to help win the war by bombing important targets like factories and railway stations. This would cause problems for the British army by slowing down the production of munitions and preventing troops from getting to the Front Line.

What is a Zeppelin?

Airships were used from around 1900 until the 1930s. The Zeppelin was a type of airship made up of a metal frame filled with hydrogen gas, powered by engines attached to a 'gondola' (people-carrying compartment) hanging from its underside. This type of airship was named for the original designer, Count Ferdinand von Zeppelin. 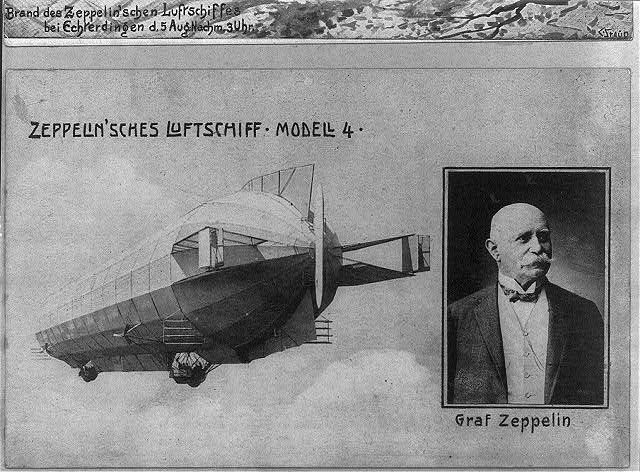 Zeppelin airship and inventor, Graf Zeppelin
Zeppelins were first used as luxury transport. The military saw their potential for bombing distant enemy cities after the outbreak of the First World War. At first, hand-held bombs were dropped by the crew of the airship on to targets below, and so they were not very accurate. Civilians and buildings nearby could easily be hit instead.
Zeppelins were difficult to attack because they flew higher than British anti-aircraft guns could reach. They were also buffeted by strong winds and hard to steer. If brought down, they would burst into flames, as hydrogen is highly flammable.  Winston Churchill joked that Zeppelins were 'enormous bladders of combustible and explosive gas', but they still did a great deal of damage. 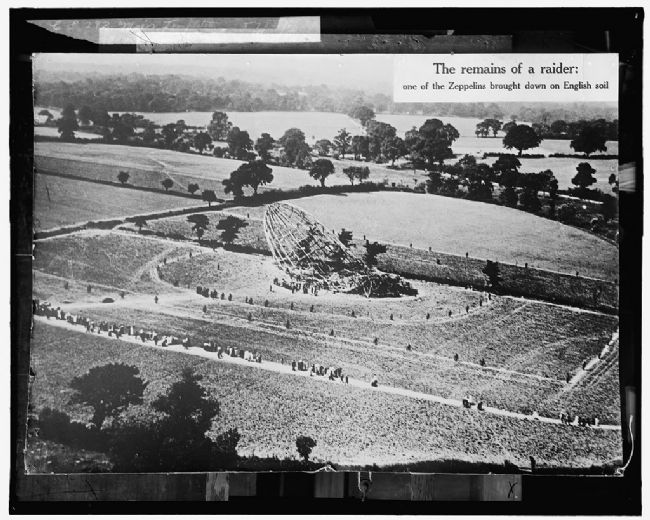 In December 1914, a German airship flew across the Channel to Dover and dropped the very first bombs on British soil. Beatrice Webb experienced a Zeppelin raid in London on 8 October 1915:
The window rattled behind me: then all the windows rattled and we became conscious of the booming of guns getting nearer. 'At last the Zeppelins', Sidney [Beatrice's husband] said, with almost boyish glee. From the balcony we could see shrapnel bursting over the river and behind, somewhat aimlessly. In another few minutes a long sinuous airship appeared high up in the blue black sky, lit up faintly by searchlights...

It moved slowly... the shells bursting far below it - then there were two bursts that seemed nearly to hit it and it disappeared... It was a gruesome reflection that while we were being pleasantly excited, men, women and children were being killed and maimed...

There was apparently no panic, even in the crowded Strand...'Did you see the Zeppelins?' was the first question, in the most cheerful voice, which every man, woman and child asked each other for at least twenty hours afterwards.
(Beatrice Webb, Diaries 1912-24, quoted on BBC History site, link below)
Often the Zeppelin attacks did not achieve very much. In October 1915 Zeppelins bombed the St Catherine’s Hill area of Guildford, killing a swan and doing only minor damage. In spite of this, a local insurance company started offering people protection against injury or damage caused by air attack (see Daily Chronicle newspaper advert in 'Resources'). Guildford Heritage Centre preserves a fragment of one of the German bombs dropped that day (see below). 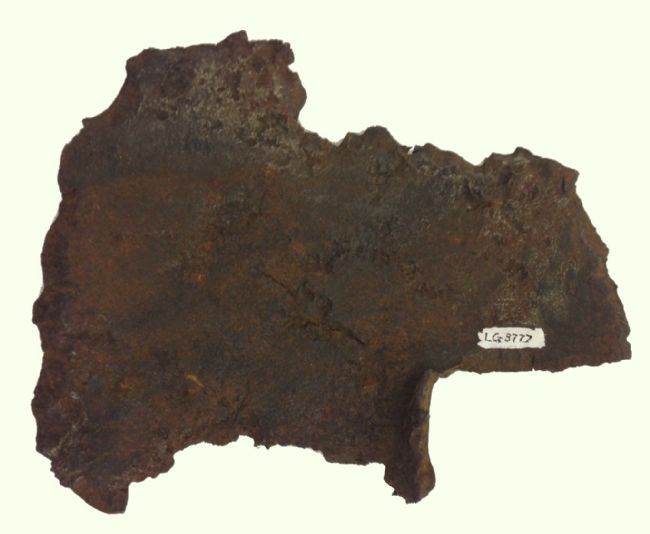 German Bomb Fragment
Soon the Zeppelins were replaced by the much improved, and far more deadly, Gotha and Giant bombers which flew together in formation and attacked British cities in daylight. On 13 June 1917, during just one raid on London and Kent 162 people were killed, including 18 children at an East End school. 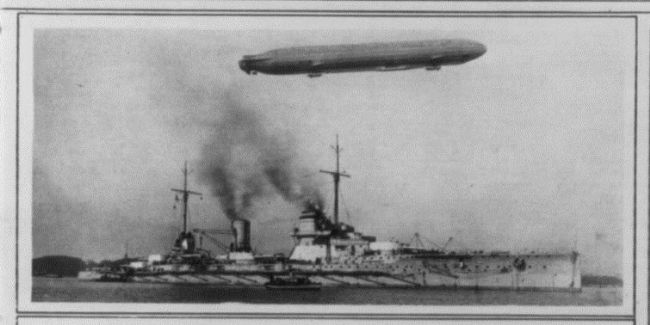 WW1 Zeppelin Hovering above a Battleship
The German bombing raids destroyed hundreds of family homes but far fewer important military sites and the civilian death toll caused fury, possibly even boosting army recruitment. However, the air raids of 1914-1918 gave a hint of what was to come during the Blitz of the Second World War. 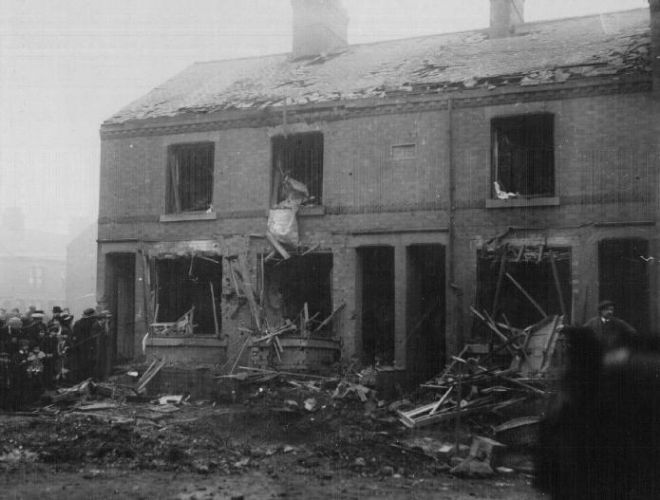 Airship – an aircraft that is lighter than air, powered by helium
Bladder – bodily organ for storing liquid or gas; also an inflatable bag
Civilians – people not in the military in wartime
Combustible –likely to catch fire
Formation - when planes fly together in a pattern
Front Line – the furthest forward part of an army, nearest the enemy
Home Front – the idea of people at home working to support a war, like soldiers fighting at the 'front'
Hydrogen – a highly flammable type of gas
Maimed - a severe, permanent injury
Recruitment - when people join something or apply for a job
Next section