Victorian School and Work in Preston

John Horrocks, founder of Horrockses cotton manufacturers, was born in 1768 and established the first weaving sheds in Preston in 1800. The Yard Works and Centenary Mill were the largest mills, although there were many other smaller mills owned by other companies throughout the town. The rise of the cotton mill changed the landscape and lifestyle of Lancashire towns throughout the Victorian era.

The mills were very noisy and dangerous places to work due to the machinery. The workers developed a system of sign language to communicate with each other over the din of the machinery. The mills were also very hot and humid places as this climate kept the cotton in good condition. Many people became ill with respiratory and lung conditions caused by breathing in the cotton dust. The majority of employees were women and children who worked long hours. It was common for adults to work for around 12 to 14 hours a day, and half a day on Saturday, with children working around 6-10 hours a day, with the possibility of time in school on top of that. Despite the long hours and poor conditions, mill workers were generally better paid than other members of the working class.

The last mills in Preston were built during the 1890s and early 1900s. The industry went into decline after the Second World War and cotton ceased to be manufactured in Preston in the 1960s when Horrockses was sold off. Cotton could now be produced and imported more cheaply in Asian countries such as India. Man made, synthetic materials were also becoming more popular than cotton.

Use the image below with the discussion ideas. Horrockses Yard Works was one of the largest cotton mills in Preston in Victorian times. 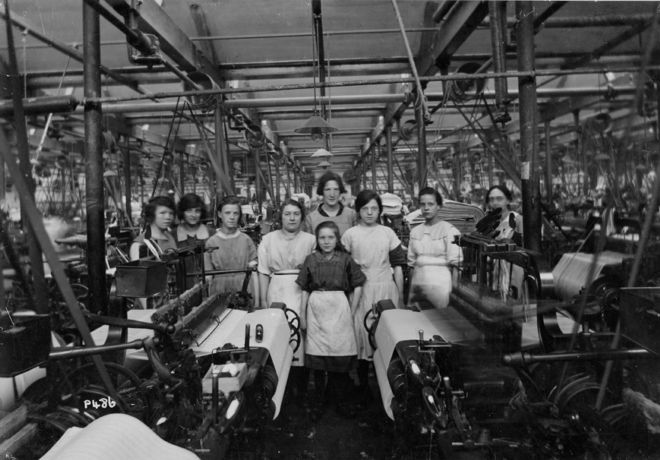 Victorian Weavers at their Cotton Looms