Who wore this shoe? And why is it designed in this way?
View resources Teachers notes Share
Add to board
Previous section
Child's Clogs 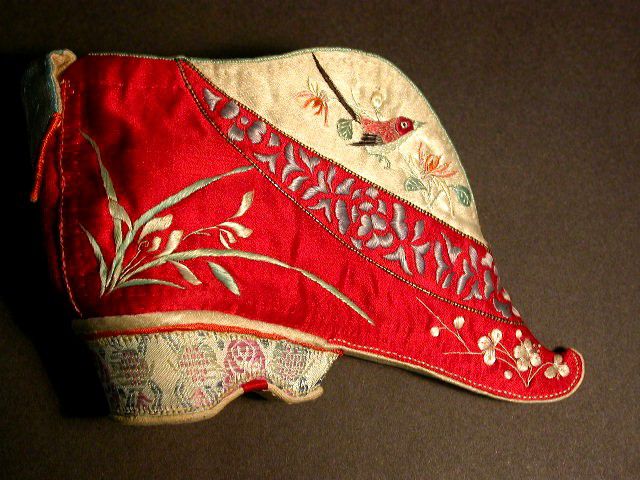 These shoes, also known as lotus shoes, were made during the late 19th century for a Chinese woman with bound feet.

The tradition for foot binding was started in the 10th century by a dancer called Precious Thing. She danced on her toes inside a six-foot high lotus flower made of gold and decorated with jewels, pearls and silk tassels. Precious Thing wore silk socks over which she wound long, narrow bands of silk. She was much admired by the Prince Li Yu and as a result women envied her and wanted to copy her small feet.

At the time, for women marriage was seen as related to status. Smaller feet were thought to attract a husband, helping women to achieve higher standing, so the craze became a custom. Chinese women wanted their feet to look like lotus buds and by the 19th century nearly all women in China had bound feet or were laughed at and called names if they had big feet. Women wore smaller and smaller shoes to reduce the size of their feet.

The ideal size for feet was considered to be just 3 inches (about 7.6 centimetres). The heel needed to be full and round with the big toe coming to a thin point. A girl’s mother would make her first pair of 1 ½ to 2 inch long shoes from the best fabric she could afford, which was usually red. Red is considered a symbol of good luck and virtue, and is worn on special occasions.

The sole was made by layers of cotton pasted onto a wooden board, which was then wrapped in cloth and stitched on to give a quilted look. The upper was made of silk which had been embroidered, using a pattern, and attached to cotton strips. Before being sewn to the sole it was moulded with either a carved wooden foot or by stuffing it with grain or cotton.

Girls were taught how to make their own shoes in the home; ideally she needed 16 pairs, four for each season. Peddlers would visit women's homes with the materials they needed for making shoes. The fashion was so important that contests were held, in which the girls would stand behind a board with their feet poking out and the shoes were judged for their small size and beautiful handiwork.

A woman skilled in foot-binding would start binding girls feet when they were between 5 and 7 years old, when the foot was well developed but still soft. She would bind her feet frequently over a period of about 2 years. The feet were wrapped in a particular way with bandages and were sewn at intervals to stop them unravelling or being unwound by the girl.

She then had to put on her silk shoes, stand and take her first agonisingly painful steps. The process started in the winter months when the cold would numb her feet. The mother would pray that her daughter would have perfect tiny feet and would walk gracefully.

However, girls and women with bound feet often got infections and other health problems and could only walk with a stick. They could no longer play and run around freely, they could only hobble around at home. The tradition started to go out of fashion in the 19th century. There are very few Chinese women now who have bound feet and the shoes are manufactured mainly as souvenirs for tourists.

There are many legends surrounding this tradition. It is said that an empress with a clubfoot became tired of being different to all the other women in the kingdom that she told the emperor the only thing that would bring her peace was if all the other women had their feet crippled. To make her happy he declared that all women must bind their feet.