Health Risks in the Factories

There were very few health and safety facilities in early 20th century factories. Workers used hazardous, unguarded machinery, which could cause terrible injuries if it accidentally caught clothing or hair. During an explosion in 1916 at the No. 1 Filling Factory in Leeds, Jane Swift caught her hair in a machine, which peeled off her scalp all the way round her head.

Munitions workers handled highly flammable and explosive materials and, despite regulations banning matches and hair pins from factories, there were accidents. Like soldiers, factory workers wore tags, so that their bodies could be identified after an explosion. 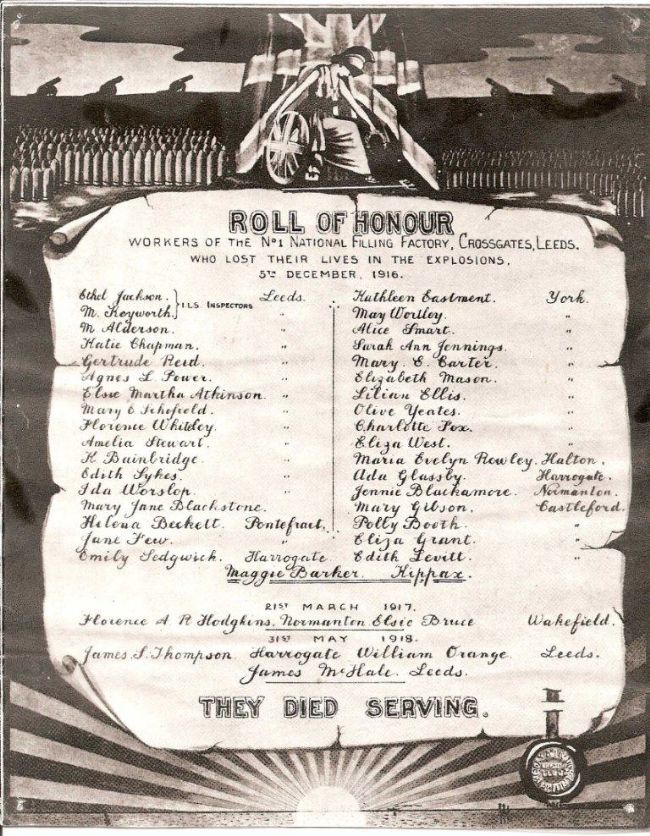 Roll of Honour for those Killed at the Barnbow Factory in 1916
The dangerous chemicals they worked with had severe side effects too. TNT caused toxic jaundice and workers were nicknamed 'Canary Girls', as their hair and skin turned yellow. One Canary Girl said later, “You expected to feel 'poorly'; our skin was perfectly yellow, right down through the body, legs and toenails even,” (quoted by Kate Adie in  Fighting on the Home Front, 2013).

Canary – small yellow songbird, often kept as a pet
Flammable – can easily catch fire
Hazardous – something that can be very dangerous
Jaundice – illness that causes the skin, even eyeballs, to turn yellow
TNT - a yellow chemical material used in explosives
Next section

The Post-war Legacy of Female Factory Workers in WW1