Life followed a much stricter pattern than it does today, and for nearly everyone at the time, Monday was the day the women and girls of the house did the washing.  With no running water inside the cottage, water needs to be fetched from the well.  This was a physically demanding job, but was just the start of a long, tiring day where everything is done by hand.

Once the water has been brought to the cottage, it is heated up in the ‘set pot’, a large metal pot that a fire would be built under,  before being poured into the washtub.  This is a large, metal barrel shaped tub that stood on the ground.   A cake or bar of soap is grated to create soap flakes, which are then added to the heated water. 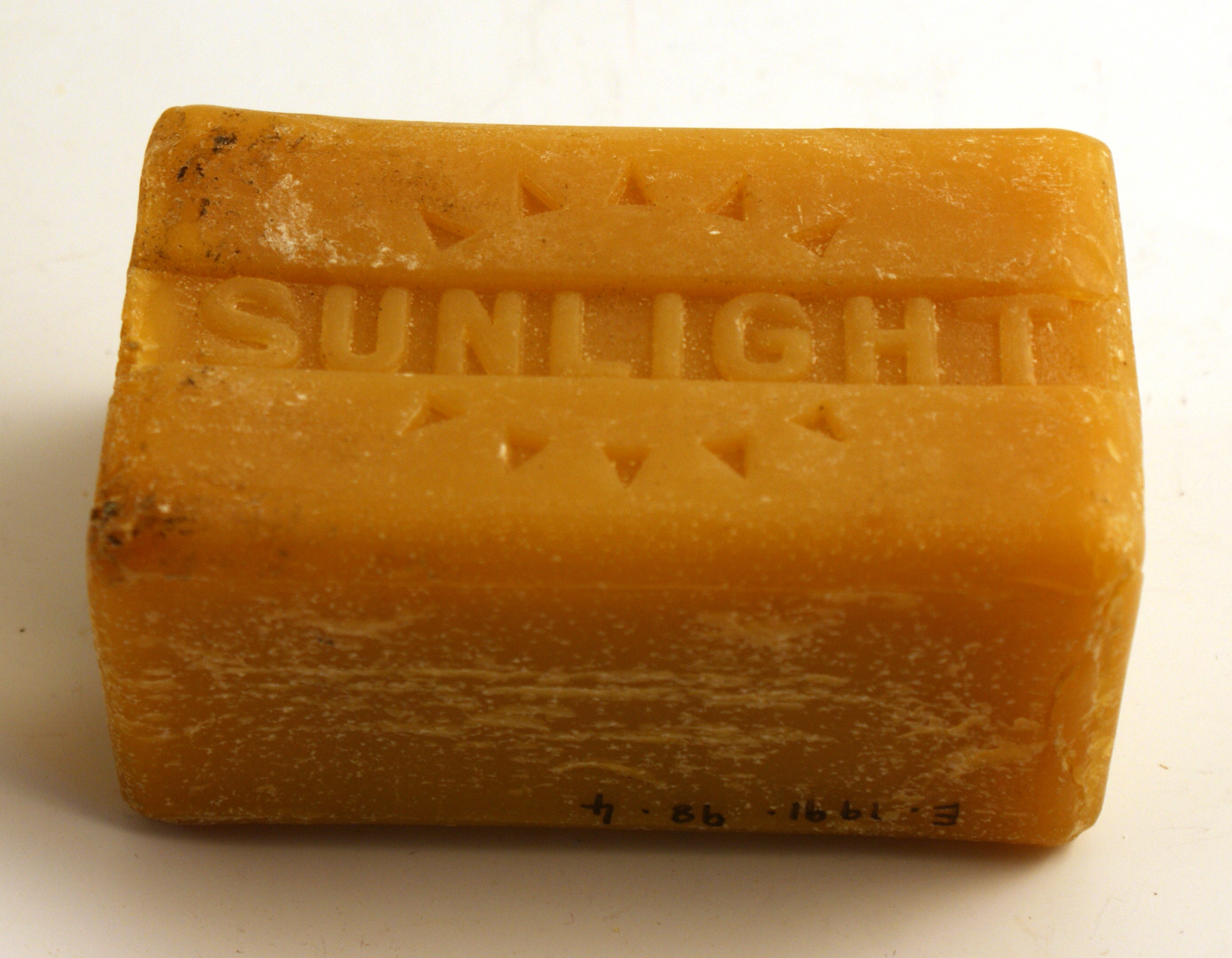 To get the clothes and linen clean, two other tools are used, a rubbing or wash board and a posser.  Possers came in a variety of different shapes, including a flat disk, a metal dome, and a disk with three or more little ‘legs’.  All types were mounted on a long wooden handle.  The Posser is used to move the water around in the tub, making sure that the soap got into all the clothes and sheets and the dirt came out.

It took two loads to get all the washing done, with both loads being washed in the same tub of water.  Coal was precious and hot water was therefore limited to one tub.  White clothes and less dirty linen would be washed, followed by the mucky work clothes in the second load. 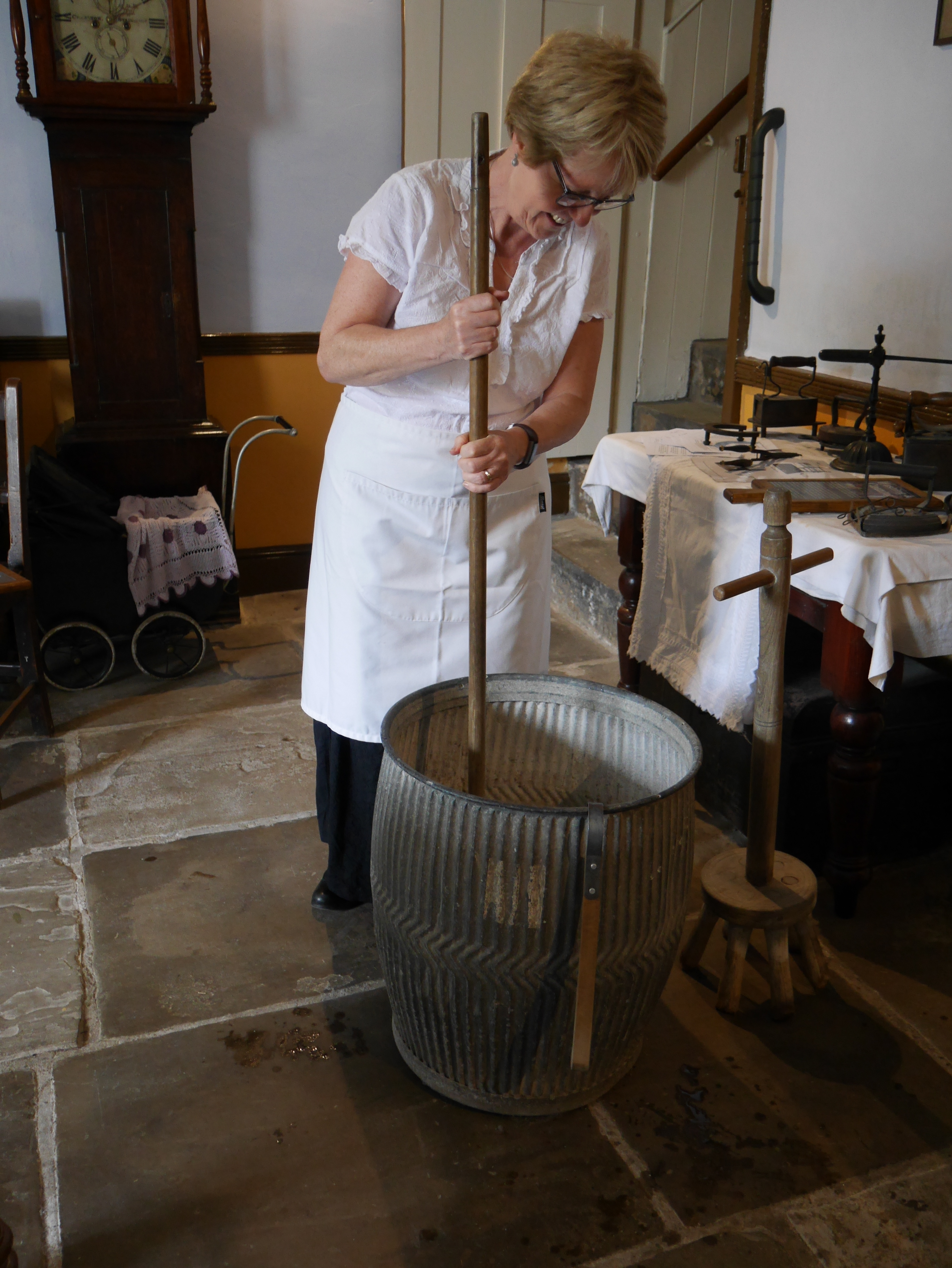 The rubbing board is a rectangular wooden frame, which holds either another piece of ridged wood, or a piece of textured, ribbed glass.  After soaking and possing, each item of clothing was taken out, squeezed and rubbed against the ridges of the washboard.  This helps to push the soap through the material and get rid of the dirt. 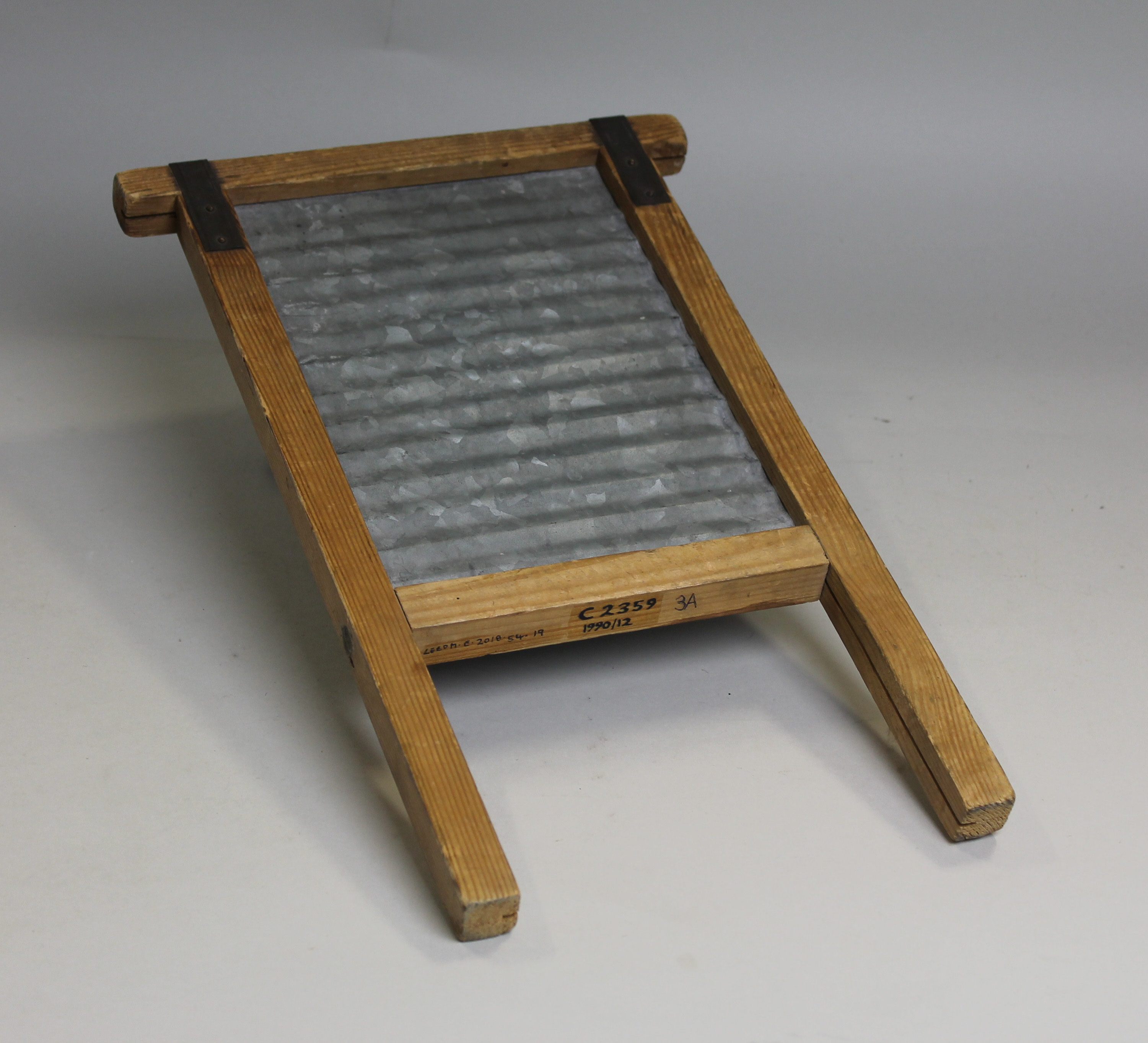 Rinsing was done in the second washtub.  Once the clothes and sheets are washed and rinsed, they are put through a mangle to squeeze out the water so that they can dry as quickly as possible.  This was a machine with two rollers, one on top of the other.  The wet clothes were fed in one side and with the turning of the handle, they would be forced through the narrow gap between the rollers, squeezing out the excess water.  This was collected in the washing tub for washing the second load.  The gap between the rollers could be adjusted and the same item of clothing, or folded sheet was passed through the mangle several times. 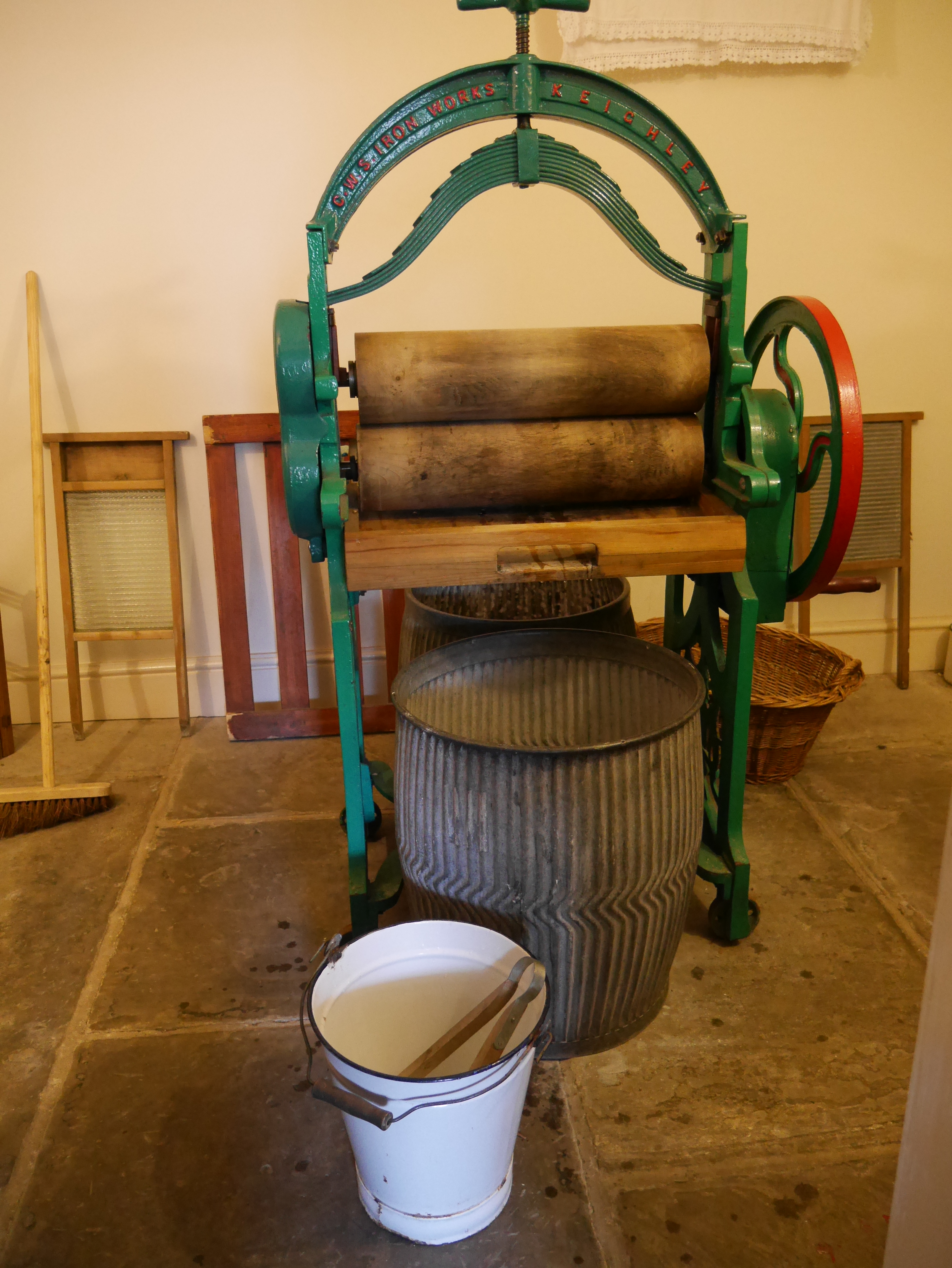 With no central heating, and limited room for hanging clothes to dry by the fire, most were hung outside.  Each family had ‘hanging rights’ – you were allowed to string your washing line across the road and hang your washing out on it.  Imagine what chaos that would cause today!

Everything was washed in this way, from small items such as socks and vests, to the bedsheets.  Because not everything could fit into one washtub, this labour intensive process was repeated throughout the day until all the laundry had been done.

On Mondays, the kitchen would have been full of laundry at different stages of washing, and the fire in the range was needed all day to provide the hot water that was needed.  This meant that no hot food could be prepared or cooked.  Monday’s meals were therefore always the cold leftovers from Sunday.  Not the nicest way to end such a gruelling day!

With Monday being washday, Tuesday was ironing day! Flat irons were heated up on the kitchen range and used to iron the laundry.  Like all work at this time, it was a slow and physically demanding job! 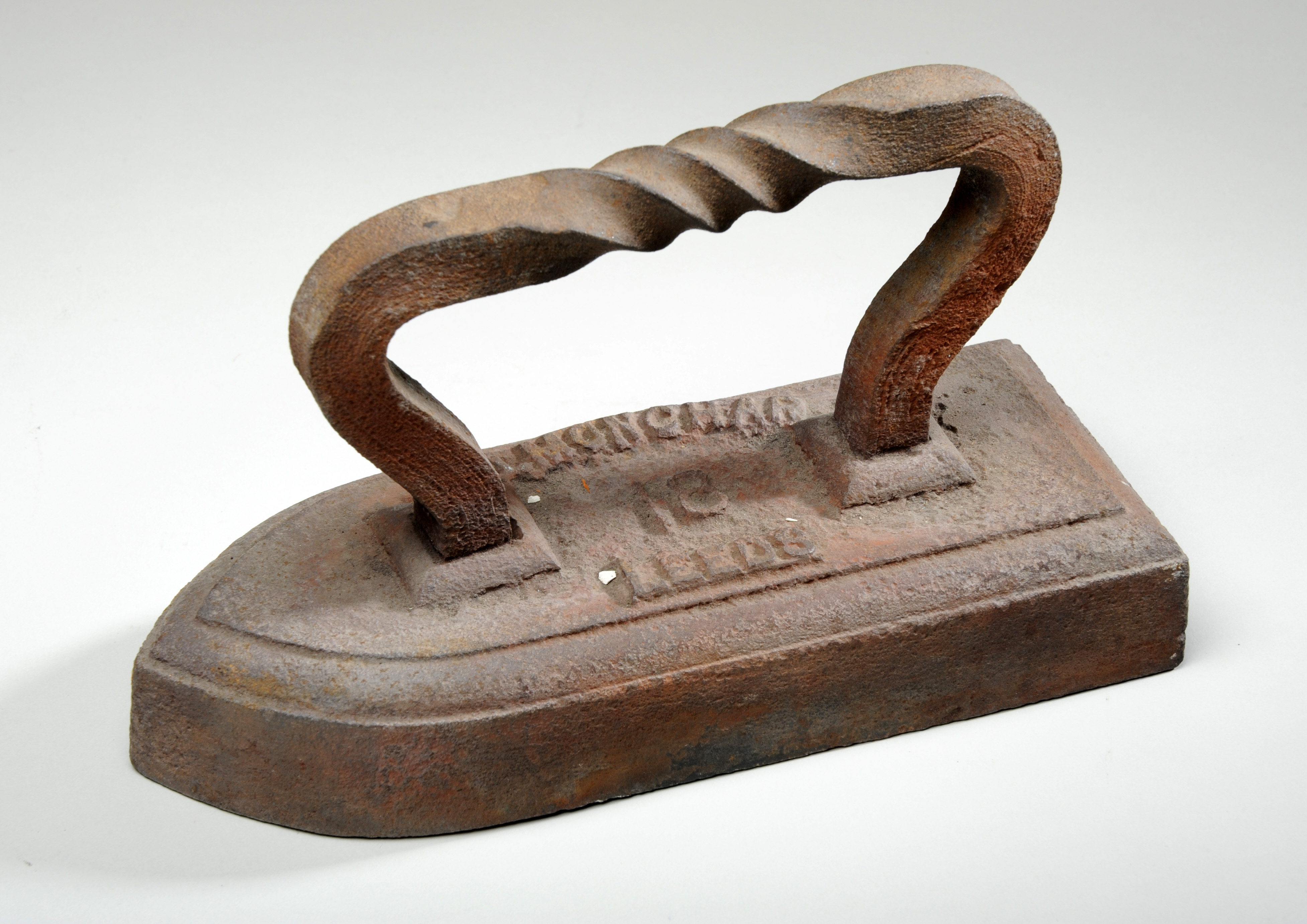 Set pot – A big metal pot used for heating large quantities of water, for example for doing the laundry.

Possing – the action of moving a posser up and down in a washtub to help the soapy water get into all the washing and help get the dirt out.

Flat iron – clothes iron made from a solid lump of metal.  It was heated on the kitchen range.