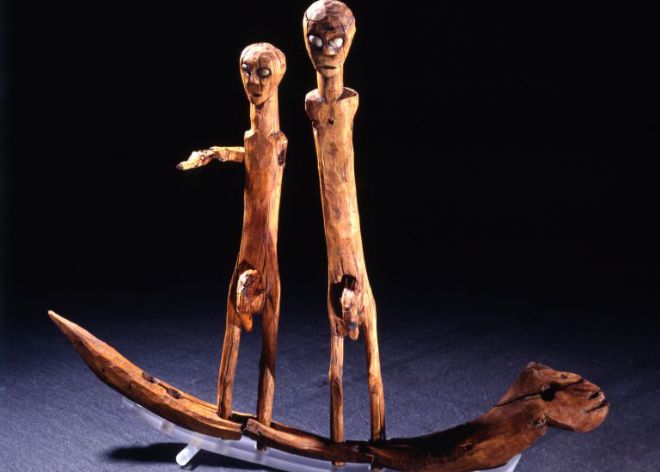 When were they made?

They were radiocarbon dated to 606-508 BCE, making them 2,600 years old, and were made in the late Bronze Age or Early Iron Age.

Where were they found?

The figures were discovered at Roos Carr, near Withernsea, East Yorkshire.

What were they used for?

We cannot be sure, but the figures may represent votive offerings of some kind, perhaps gods or ancestor figures. The fact that they were apparently recovered from 'a layer of blue clay' suggests that they were originally deposited in or near water. This would be in keeping with the wider European cult practice of depositing items such as metalwork in rivers, marshes and other marginal land.

What is a votive?

It was used as a votive. A votive is a deposit or offering displayed or deposited, without the intention of recovery or use, in a sacred place for broadly religious purposes. A recent study has suggested that the choice of wood may be significant and relate to the particular god being represented. Perhaps there is a link between a particular god and a type of wood, such as the Norse God, Odin (or his earlier manifestation, Ull), and the yew tree.

There are nine other surviving comparable figures in Britain and Ireland, ranging in date from about 2,500 BCE to 148 BCE. They are made from a number of different woods - ash, pine, yew or oak. Some are definitely male; some, like the Roos Carr figures, have removable genitalia and so could be either male or female. Only one, from Ballachulish in Scotland, is unambiguously female.

The map below shows where the figures were found in East Yorkshire:

More resources on My Learning related to this subject area include:

Hallaton treasure and the Romans