Art and Empire in Leeds

‘Retribution’ (1858) by the artist Edward Armitage (1817-1896) is an explicit response to the Indian Rebellion of 1857. To contemporary British audiences, the rebellion represented a violent uprising without justification. The suppression of the rebellion by the British was particularly brutal, with the British public primed for vengeance by reports of atrocities against women and children. It is now considered to be an early expression of what would become an independence movement against British rule over India. 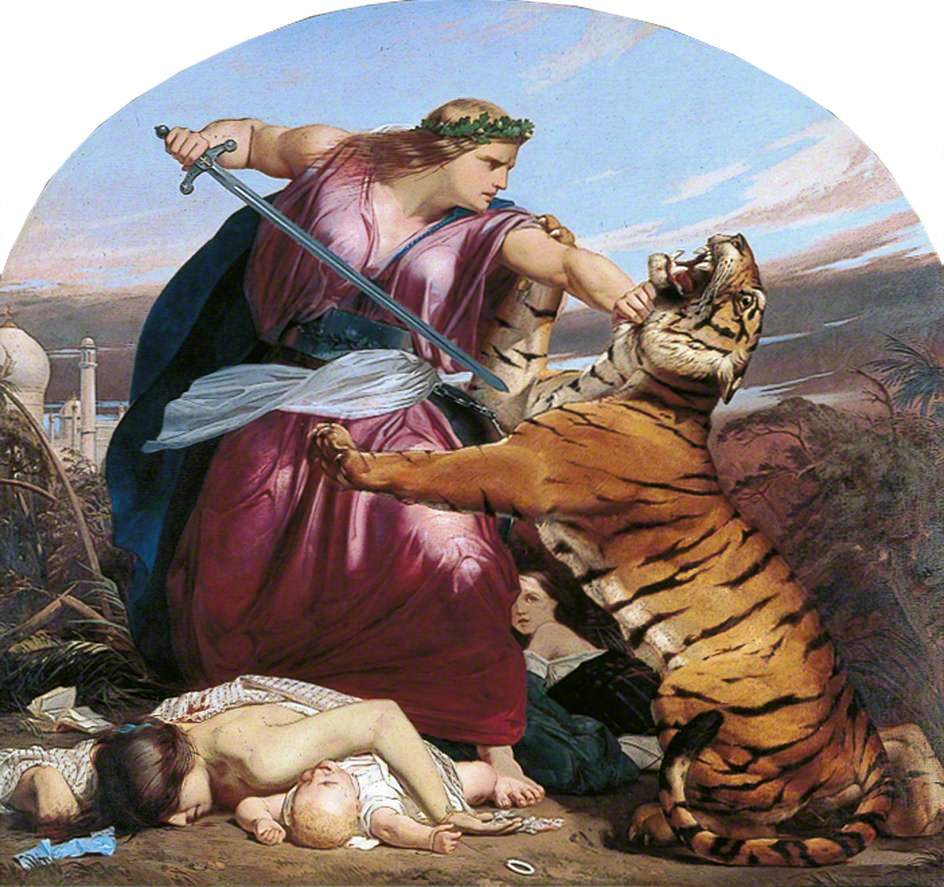 During this period the private East India Company employed sepoys - Indian soldiers - to maintain British control of the country. The extension of the East India Company’s power during the 1840s and 50s and concurrent increase in Christian missionaries in India caused tension and suspicion among the sepoys. The specific catalyst for the rebellion is usually attributed to the introduction of a new rifle cartridge, rumoured to have been greased with fat from cows and pigs and therefore deeply disrespectful to the Hindu and Muslim soldiers, although wider social, political and economic factors are now recognised as more significant. The first shot against the British was fired by Mangal Pandey on 29 March 1857, and the rebellion spread over the course of the following months, and into 1858 in some places.

The rebellion was eventually quelled by British forces and declared over in July 1859. It led to the dissolution of the East India Company in favour of direct rule by the British government. It acted powerfully on the British imagination, with interpretations such as ‘Retribution’ reinforcing the narrative that the British had been the sole victims of these assaults and its forces had acted with heroism and nobility.

The painting is large and square with rounded top corners, displayed in a gilded frame. It is an oil painting on canvas. Canvas is most often made from cotton, which from the mid-eighteenth century was imported to Britain from plantations in the West Indies through the labour of enslaved people. Colonisation of India consolidated Britain’s monopoly over the production of cotton. By the mid-nineteenth century cotton remained a principal industry in Britain, although the source of the raw material had shifted to the United States. While in Britain, the Abolition of the Slave Trade Act had been passed in 1807 and the Slavery Abolition Act in 1833, it was not until 1863 that the United States began to emancipate its enslaved people.

Alternatively, it is possible that the canvas was made from linen, derived from the flax plant. In this case the raw materials could have been both grown and processed in Britain. 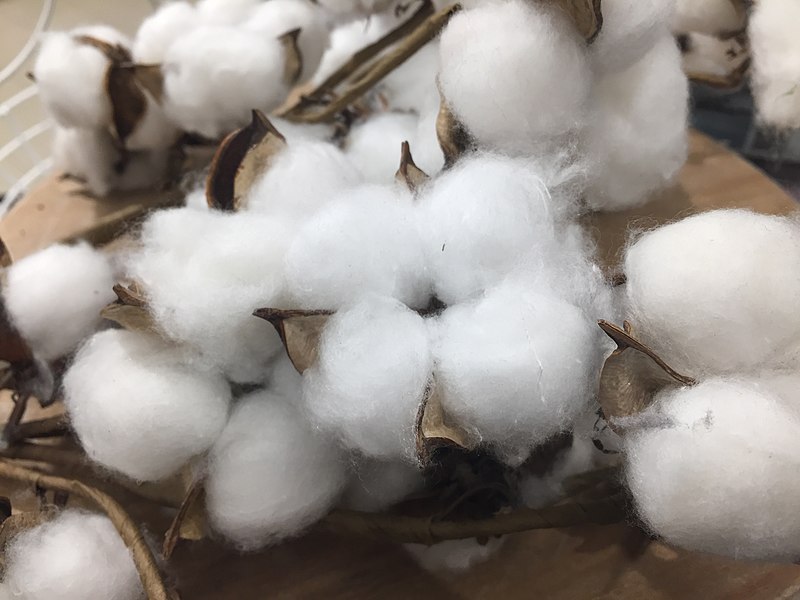 Pigments for oil painting were usually purchased from specialist ‘colourmen’ in the nineteenth century, though without archival sources or materials analysis, it is difficult to determine which precise pigments were used by specific artists. The trade in pigments was certainly international and some of the minerals and plants used are likely to have been imported to Britain through colonial trade routes. Experimentation with chemicals, often aimed at improving lightfastness, led to the development of new synthetic pigments such as ultramarine. The oil used to bind the pigments was generally linseed, with poppyseed and walnut also in use during this period. Premixed metal tubes of paint were not widely used until the 1860s.

The subject of the painting is the Indian Rebellion of 1857. The two primary figures are allegorical: Britain is represented by the female figure of Britannia. Britannia dominates the composition as the largest figure, draped in mauve and blue with a wreath of oak leaves crowning her head. She holds a sword in her right hand while the left grips the throat of a tiger.

The tiger is used here to represent India, depicted as a fierce and savage wild animal with its teeth and claws ready to strike. Despite the power of the animal, the artist has chosen to present the conflict at a decisive moment—it is on the back foot and about to be slain by Britannia. The angle of her sword and the body of the tiger form a dynamic diagonal line across the picture from top left to bottom right, with the viewer left to imagine the inevitable outcome of this struggle.

There are three secondary figures in the painting: a woman, a baby and a child. It is implied that the woman, lying face down at Britannia’s feet, has been killed by the tiger as her skin is painted with a greenish tint and her hands rest at unnatural angles. The baby beneath her left arm appears to be crying. The child between Britannia and the tiger appears to be about to escape the conflict. The background contains generic foliage to indicate an unspecified jungle setting, with a building on the left intended to situate the action in India.

The Painting and Leeds Museums and Galleries Collection

At the time of its production, Edward Armitage lived at 4 Grove End Road, St John’s Wood, London. The painting was presented by the artist to Leeds Town Hall in the year in which it was completed in 1858. The Accessions Register for the permanent collection Leeds Art Gallery records it as having been given as a gift, at which time it was valued at £500.

It was first shown in public at the Royal Academy of Arts Summer Exhibition between 3 May and 24 July 1858, in the West Room of the building the Royal Academy then shared with the National Gallery on Trafalgar Square in London. The Illustrated London News reported that the painting ‘occupied a conspicuous place over the door of the first room’ at the Royal Academy. In the same year it was displayed at the Liverpool Academy before arriving in Leeds. In February 1859 the committee established to decorate Leeds Town Hall with works of art decided to display the painting in the corridor leading to the Mayor’s reception rooms. The painting was displayed at Leeds Town Hall for almost twenty years, until it was transferred to Leeds Art Gallery on its opening in 1888.

Edward Armitage (1817-1896) was a painter known for his representation of historical and biblical subjects. He was born in London as the eldest of seven sons. His father was James Armitage (1793-1872) who generated through the exploitation of the iron deposits on his family’s estate at Farnley Hall to form Farnley Iron Works near Leeds. His mother was Anne Elizabeth, née Rhodes (1788-1833). 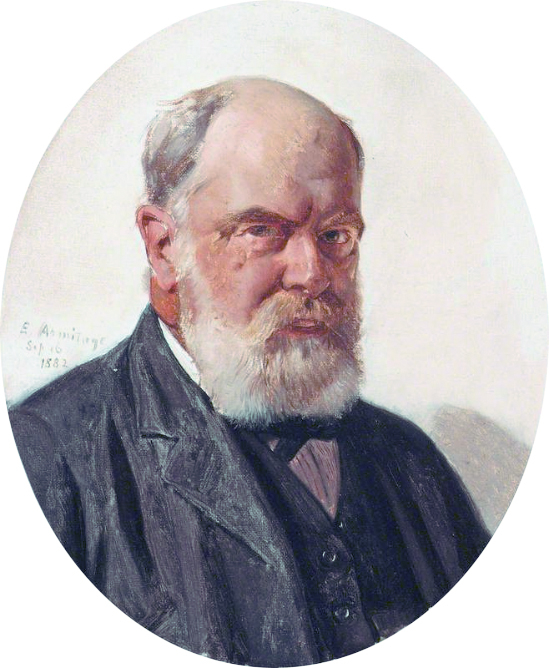 Self Portrait by Edward Armitage, 1882

Armitage studied in France and Germany from 1830 and became a student at the École des Beaux-Arts in Paris in 1837. During this time he was selected as a studio assistant of the French history painter Paul Delaroche, specifically to work on his fresco ‘Hémicycle’ (1838-41). Delaroche was a primary influence on Armitage, who was informed by his Academic methods, themes and style of drawing and composition. Armitage began to exhibit as an artist in his on right in the early 1840s and he found success in the competitions to decorate the new Houses of Parliament in London during this period, completing two frescos in the early 1850s after returning to England.

From 1848 to 1893 Armitage regularly exhibited at the Royal Academy of Arts in London. 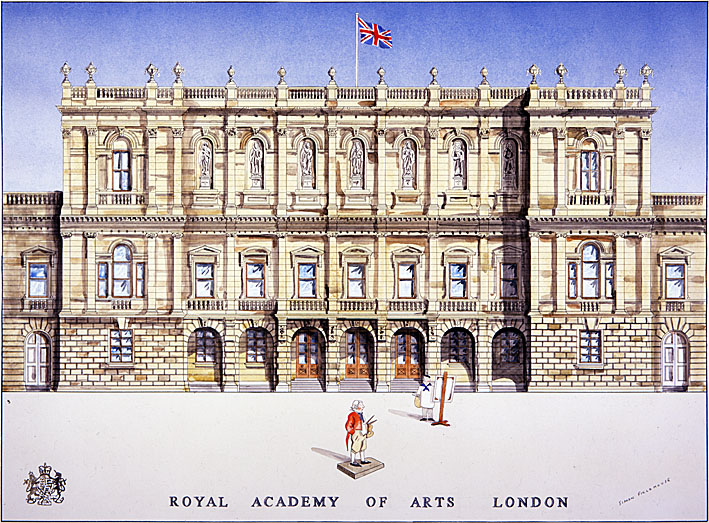 The Royal Academy of Arts

A visit to the Crimea in early 1855 resulted in two large military paintings - ‘The Stand of the Guards at Inkermann’ and ‘The Heavy Cavalry Charge at Balaklava’ - which can be considered precursors to ‘Retribution’ in their depiction of contemporary conflict overseas. In his own time it was noted that his work was quite different from his contemporaries associated with the Pre-Raphaelite Brotherhood. He rejected excessive detail in favour of dramatic narrative, and saw the role of art as the imitation of life rather than exact documentation of events. His independent wealth meant that he could pursue his own interests without chasing commissions or following trends in art.