Donald Simpson Bell was the first professional footballer to join the army in the First World War. He also became the first, and only, footballer ever to receive a Victoria Cross Medal, the British military’s highest award for heroism. 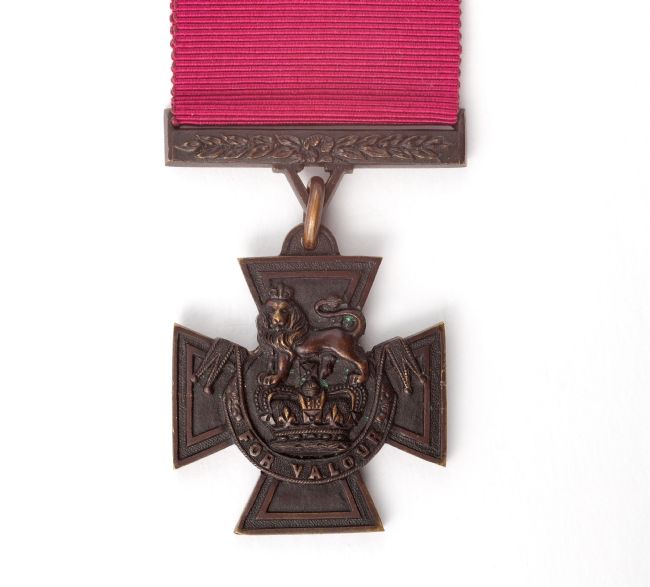 Front of a Victoria Cross medal
Born on 3 December 1890 in Harrogate, North Yorkshire, Donald was a keen sportsman: a good swimmer, captain of his college athletics team and an active cricket, rugby, football and hockey player. After leaving school, Donald played amateur football with Crystal Palace and Newcastle United, before returning to Yorkshire and working as a teacher at Starbeck School. 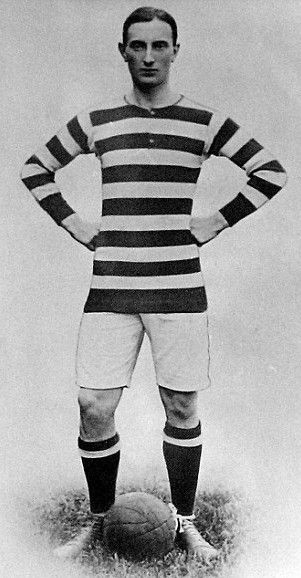 Donald Simpson Bell, Professional Footballer and WW1 Soldier
In 1912 Donald became a professional footballer, playing for Bradford Park Avenue. He helped his team to gain promotion to the First Division in the 1913-14 Season. The First World War interrupted Donald’s football career. When war broke out he decided to join up with the West Yorkshire Regiment, and became the very first footballer to enlist. He was soon promoted to Lance Corporal and in 1915 moved to the 9th Battalion, The Yorkshire Regiment (Alexandra, Princess of Wales' Own).

"I only chucked one bomb but it did the trick"

On 5 July 1916, during the Battle of the Somme, on his own initiative Donald made his way across No-Man's-Land, while under heavy fire, to destroy a German machine gun. According to the London Gazette, he ‘crept up a communication trench’, then ‘rushed across the open, under very heavy fire’, before throwing a Mills bomb at the gun. The gun successfully knocked out, he then threw more bombs into the trench, killing 50 German soldiers.

‘This very brave act saved many lives and ensured the success of the attack,’ concluded the Gazette. Donald disagreed: ‘I must confess it was the biggest fluke alive and I did nothing,’ he wrote home to his mother on 7 July. ‘I only chucked one bomb but it did the trick.’

Donald was killed in battle five days later, while again attempting to destroy a German machine gun. He was 25 years old. On 9 September 1916 his wife Rhoda collected Donald’s Victoria Cross medal (pictured above) from King George V. The reverse of the medal is engraved with the date of Donald's heroic act, '5 July 1916'. 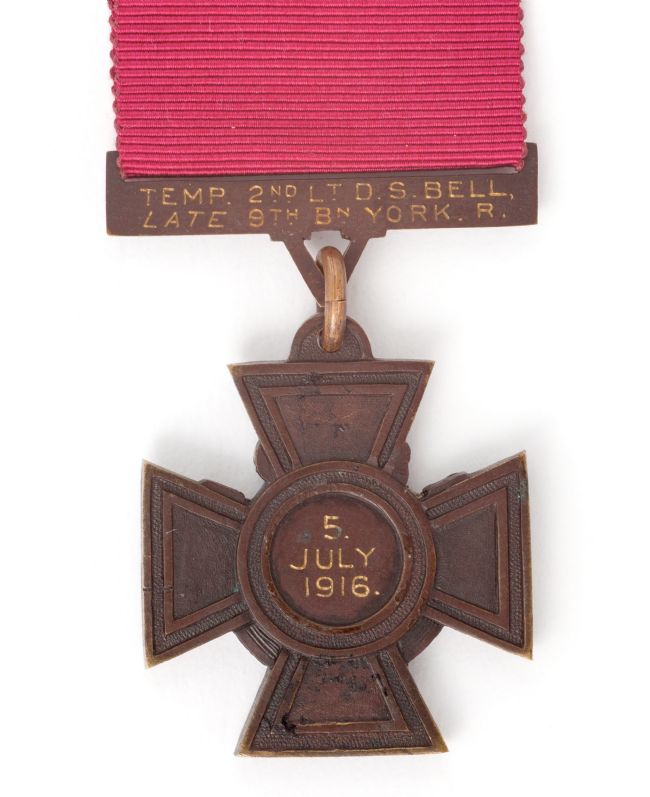 Reverse of a WW1 Red Cross Medal
Donald Bell is remembered as one of the heroes of the First World War and British footballing history. He is buried at Gordon Dump Cemetery, in Ovillers-la-Boisselle near Albert in Northern France. In 2000 the Professional Footballers’ Association put up a memorial to him on the battlefield where he died, which has been renamed ‘Bell's Redoubt’, in his honour. You can go and see his medal on display at the National Football Museum in Manchester. 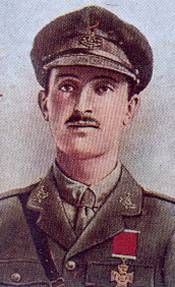 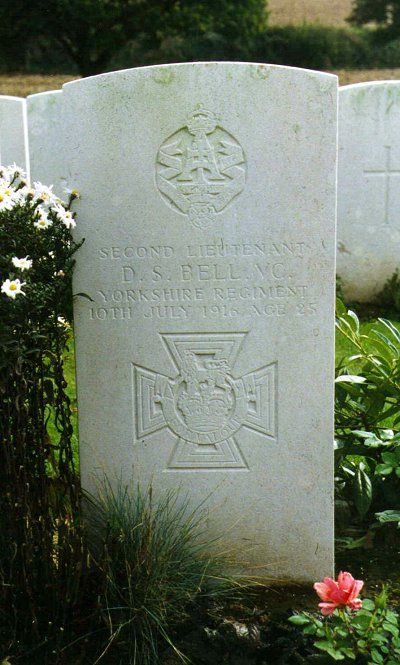 A Brief History of the Victoria Cross Medal

The Victoria Cross was founded during the Crimean War (1853-6). This was the first war where newspaper reporters were on the front line and a journalist at the Times newspaper, William Howard Russell, campaigned for an award that could be given to ordinary soldiers, not just officers, for acts of bravery.
Although there were concerns that some soldiers might risk their lives by doing dangerous things to win the medal, MPs supported it. They asked Queen Victoria to create a special medal for ‘personal gallantry’ which could be awarded to every soldier, ‘from the highest to the lowest’. Prince Albert suggested that it should be called the Victoria Cross.
Since then, 1,354 people have been awarded the Victoria Cross, with 634 given out during the First World War. Since the end of World War Two, 11 people have received the medal.
(For a full history of the medal see our WW1 Medal Stories resource and interactive)

Amateur – someone who undertakes an activity without being paid
Battalion – a military unit of 300-800 soldiers
Battle of the Somme –  From 1 July-18 November 1916 over one million men were killed or injured in this battle over the River Somme
Enlist – sign up to join or support something
Fluke – accident or luck
Gallantry – bravery in a dangerous situation
Heroism – great courage
Lance Corporal – soldier one rank above private, in charge of 4-5 soldiers
Memorial – object acting as a focus to help us remember a person or event
Mills Bomb – an oval-shaped hand grenade (small bomb that can be thrown)
No-man’s land – empty area being fought over or disputed
Professional – doing something as a paid job rather than a hobby
Promotion – moving to a higher rank or better-paid job
Next section